Although the Wash House has long since ceased to be used for its original purpose, memories of those days still linger amongst the community.  Here, we record some of those memories, and show some of the equipment typically used in the communal wash houses.

None of the original equipment from the Scotlandwell Washhouse has survived, but contemporary items from elsewhere are shown below.  The only power was “elbow grease”.

Section 1 ; Washing Through the Ages

From the earliest times, people have cleaned their clothes by soaking them in water then bashing them against stones or rubbing them with grit to remove stains, then rinsing them in water. 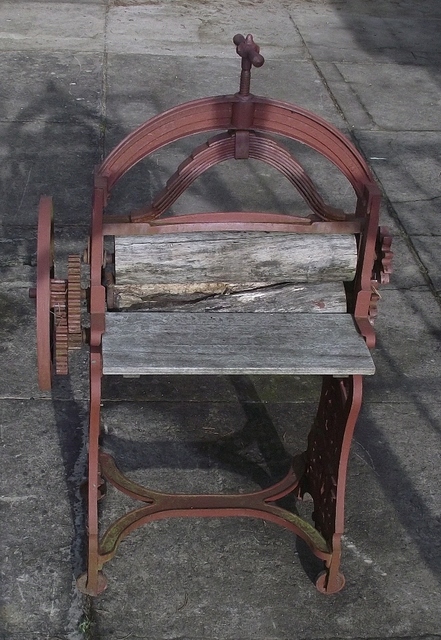 The mangle is defined as ‘a kind of press to press buckram, fustian or dyed lined cloth to make it have a luster or gloss’. The mangle was widely used from this date up until the introduction of the electric washing machine which removed water from clothes through spinning the clothes in a drum.

The earliest washing ‘machine’ the scrubbing board was invented 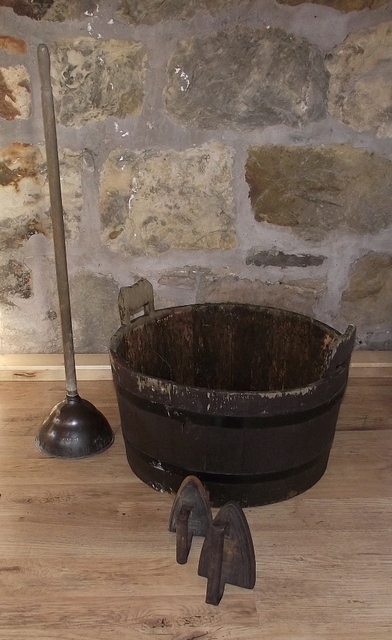 Keeping clean in Victorian times was incredibly hard work, residents of Scotlandwell, would have washed their clothing in a wooden washtub, drawing their water from the well. Referred to locally as a ‘dolly tub’ these were typically stave built ie  made of wooden slats bound by two circles of iron, not unlike a whisky barrel. To clean the clothes they would be rubbed against a scrubbing board with some soap, typically carbolic.

Carbolic soap would be a feature of every home from the poorest to the most affluent, bought from a local general merchant. This soap would be widely used within the home for personal and household purposes and is still in use in some parts of the world today.

The mangle invented in 1598 was still in use , being used to remove the excess water from wet washing.

The American James King patented the first washing machine to use a drum, however in the days prior to electricity this machine was still hand powered.

The Ornamental Well in Scotlandwell completed

Scotlandwell Wash House completed.  Water would be drawn from the Well and heated in one of the two boilers.  Scrubbing boards now mass produced would be available from one of the two grocers shops in the village.

American William Blackstone built a washing machine for his wife’s birthday, designed to remove and wash away dirt from clothes.

FL Maytag a manufacturer of farm implements introduced a wooden tub washing  machine to his range of products.

Alva J Fisher invented the first electric powered washing machine ‘The Mighty Thor’. This was a drum type washing machine with a galvanised tub and an electric motor. A patent for the Thor was issued on 9th August 1910.

Fewer than 10% of British households were wired to an electricity supply network, and most of those were wired for lighting only.  Council houses built in Scotlandwell and inhabited in 1923-24.

More households were wired up to the network. The two most common pieces of electrical equipment in British homes were the electric iron and the electric radio. A small portable electric heater cost 21 shillings (£43 today). An electric kettle was a relatively luxurious item and cost 25 shillings in 1929 (over £50 today).

Water supply installed into some homes in Scotlandwell.

Norahammars Bruk  produced a mangle model 3005-2 , an example of which was found in Scotlandwell. These machines would be manufactured  to order, the local ironmonger having their name cast onto the frame as a form of advertising.  The local example was sold by Andrew Drysdale of Newton Stewart.

Electricity installed into some dwellings in Scotlandwell, however the householder would have had to pay for its installation.

Electricity installed into the School at Scotlandwell.

‘We moved here in 1958, from a house with its own bathroom and water supply, to live in the White House. We had to haul water in buckets to the house and used the wash house to clean our clothes. It was hard work taking a whole day to get your washing done.’

‘We used to take cinders from the fire in a bucket down to the wash house to light the fire under the boiler. You had to shift back and forward between the well and the wash house to get water. Once the water heated up you just started scrubbing, going over to the well to rinse the washing under the spout. It was hard work and I had the 3 boys to keep an eye on and they were always up to something’.

‘On a rainy day you put the clothes on a clothes horse in the wash house, it was really draughty and the wind dried your clothes. You would finish drying them off at the fire’

‘At night every kid in the village was down at the Green helping to bring in the washing, sheets would be put through the mangle, and once you got up the road the clothes would be ironed. Irons were heated at the fire and then put in a shield to stop the clothes getting marked. They cooled down really quickly so you had one or two at the fire’.

‘Do you remember the money that folk used to throw into the well, there was someone who used a chip basket on a pole to get the money out, it was bright green with verdigris and we saved it in a jar to buy sweeties ’

‘We used to sell glasses of water to visitors for tuppence or thruppence, using the money for sweets’

‘I used to trail up and down everyday for water’

‘Our mum’s day to do the washing was a Monday, we always had soup for tea on a Monday as she didn’t have any time to do anything else’

‘Folk have always visited here to drink the water, we used to come down and get a pitcher of water for the house, even although we had running water’.